The ultimate Network x DAC only ESOTERIC could achieve

An all unique circuit design called “Master Sound Discrete DAC”, together with a further refined sound quality Network Module as core technology result in the ultimate Network Audio Player/DAC, the N-01XD. The outcome of ESOTERIC’s passion that strives for the original master sound.

Our goal was to assemble a careful selection of rigorously tested discrete components into a complete circuit that could perfectly reproduce all the dynamics and energy of music, which is simply unattainable using ordinary integrated chips. Our top engineering teams put their pride on the line to design and produce a quality of sound that can only be found in our Master Sound Discrete DAC discrete D/A converter.

The N-01XD’s Master Sound Discrete DAC is the most revolutionary two-channel stereo DAC circuit in ESOTERIC’s history, and is based on the original circuit developed for the Grandioso D1X Monoblock D/A Converter. As an extension of the D1X’s design philosophy, an abundance of luxurious materials have been invested in the construction of N-01XD’s Master Sound Discrete DAC, including 32 separate elements for each channel. Each of these 32 elements, including such key components as a clock driver, logic circuitry, capacitors and resistors, are kept independent to ensure the purest output with virtually no loss of musical energy. 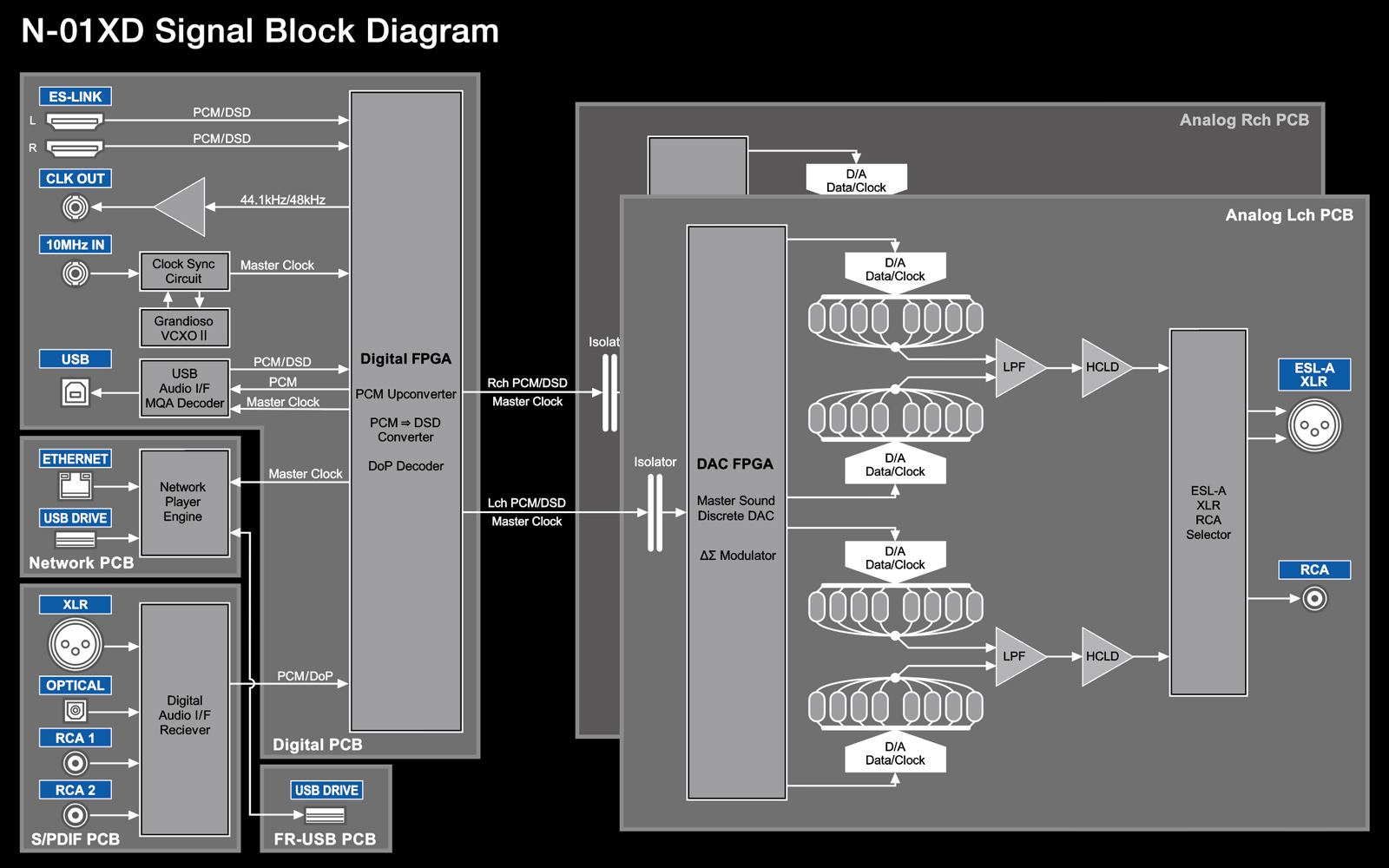 The N-01XD’s ESOTERIC-HCLD output buffer amplifier boasts an astonishing high-speed slew rate (response speed) of 2,000V/µs. Current transmission and speed—the most important factors in the design of any analog output circuit—have been pushed to the limits, while the array of EDLC** super capacitors used in the buffer circuit’s power supply provide a staggering capacitance of 250,000μF per channel for solid bass support and exceptional reproduction of all the dynamism of music coupled with a sense of realism that is truly breathtaking.
*HCLD: High Current Line Driver
**EDLC = Electric Double-layer Capacitor 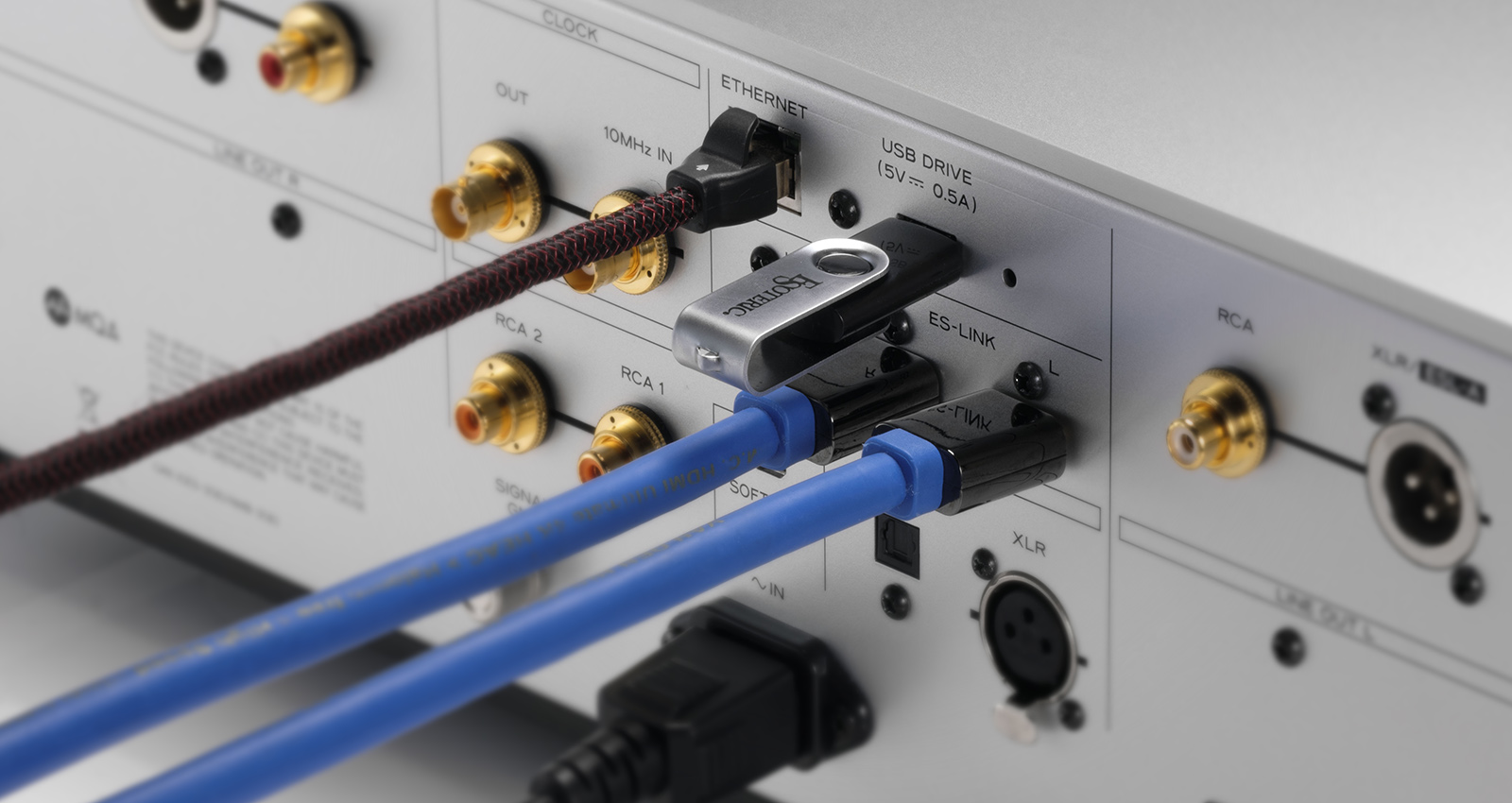 The N-01XD supports Esoteric’s proprietary ES-LINK digital wideband transmission standard. An Esoteric transport can also be connected using either two HDMI cables or a single XLR cable to enable playback of Super Audio CDs.
*ES-LINK is an ultra-wideband digital interface developed exclusively by Esoteric. Like our flagship Grandioso D1X Monoblock D/A Converter, the N-01XD’s ES-LINK has also been upgraded to Version 5 to support wide-range transmission using two HDMI cables (Max: 22.5MHz DSD  or 768kHz/48-bit PCM). The HDMI multi-cable configuration is used for fully balanced audio data, LR clock, and bit clock signal transmission. In contrast to regular digital transmission, no processing is required for signal modulation at the sending side or for demodulation at the receiving side, thus allowing a significant reduction in the DAC’s digital processing load to help realize pure digital signal transmission with near perfect optimization.

The N-01XD is also capable of MQA decoding for digital input sources(*). In addition to conventional network input, MQA-CD playback is also possible when used in combination with a CD transport.
*Only Grandioso P1X supports ES-LINK connection. (As of June 2020) 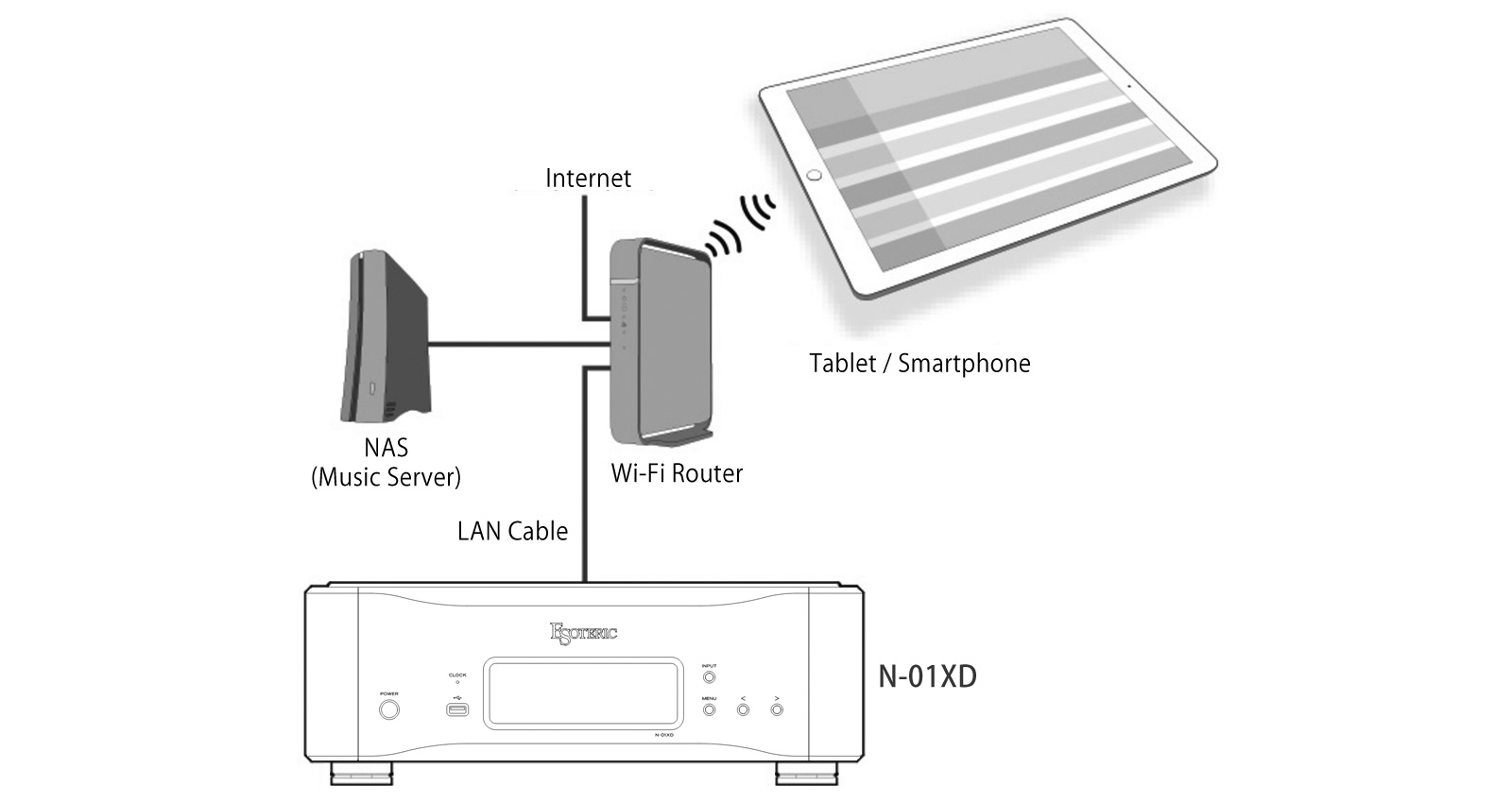 With network audio, you can realize the opulent dream of full access to all your music with superior sound quality from the comfort of your listening position. All that is required besides the audio system is a regular home LAN (such as a Wi-Fi router), tablet or smartphone, and a NAS (Network Attached Storage) device for storing your music library. With these components, you can easily begin a life of relaxing music enjoyment with uncompromising quality.

The N-01XD features noticeable improvements in network playback quality, including the latest developments in network modules that supports 22.5MHz DSD and linear power supply technology without any switching elements.

Compatible with a Wide Range of Audio Sources

Esoteric Sound Stream is an Apple iOS/Android network playback app for smartphones and tablets designed with an emphasis on both sound quality and intuitive operability. Musical tracks can be easily selected using the smartphone/ tablet to create a customized playlist for later playback. All screens have been intuitively designed for simple operation and access to playlists and libraries, making it easy for anyone to use. Yet it also offers an extensive range of refined features that meet the demands of even the most experienced users.

Key to this achievement is a superb search and retrieval function that fully utilizes tag information. Images can also be stored using the app, enabling the user to instantly scroll through album artwork and libraries according to artist, year of recording, composer or other categories. This use of tag information even allows tracks that have the same name but different formats to be easily identified onscreen.

Since 1987, Esoteric has pursued a path dedicated to being a superior high-end audio/video brand focused on introducing components of the best value by merging innovative, proprietary recording and replay technologies. In order to meet the desires of musical and visual connoisseurs who are seeking new levels of excitement, Esoteric’s mission has been to continue to develop and release new products that improve upon the "state of the art", from highly acclaimed pure audio/video source devices to Super Audio CD and DVD components. Esoteric applied its no-compromise philosophy with the same intense consideration to its flagship Grandioso series to produce the next dimension of sound and audio immersion. With the Grandioso series, Esoteric sought to eradicate ANY distortions and colorations by taking a fresh look at entrenched norms and design elements, and by scrutinizing every last design detail – no matter how minute. All of the design tweaks, too numerous to elaborate here, yield an exceptional sonic purity that sweeps away distractions and enables listeners to experience an unprecedented level of musical detail and stunning visual presentation. Overture, as a provider of the “ultimate” audio/video products, is a select dealer for Esoteric and its Grandioso line. If you are interested in purchasing Esoteric or Esoteric's Grandioso components and have an electronic component or more that you would like to trade-in, please fill out Overture’s Trade-In Form.

Aurender
Bryston
Esoteric
Marantz
Naim
TESTIMONIALS “I wanted to take a moment to thank you and the entire Overture team… for working with me so professionally and responsively to diagnose and correct the unusual, occasional distortion that was occurring…. READ MORE